"What computer equipment have we donated?" 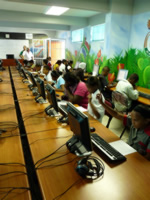 Computer equipment installed at the Zisukhanyo Stage I schools

State-of-the-art computer laboratoies were opened at the three participant schools in the Zisukhanyo Schools Project Stage I over the period August-December, 2008.

The computer hardware provided to the school consists of the following

Internet connectivity (broadband) is provided to the schools via ADSL lines.